The Blessed Mother Divine and the Sacred Feminine have filled mine eyes with love, touched my mind with vision, and filled my soul with light.

For centuries the sacred feminine, the impregnated virgin, survived underground, split off from the collective mind and soul, due to patriarchal conditioning. Now, as we move forward in the early stages of the twenty-first century, the Goddess Matriarch is awakened and ever present. As we individually and collectively address the shadow by facing our fears, illusions, betrayals, self-sabotage and un-condition ourselves (from patriarchal conditioning) we embrace the pool of aliveness, the call of wholeness, and merge with the Goddess and the collective renaissance emerging now. 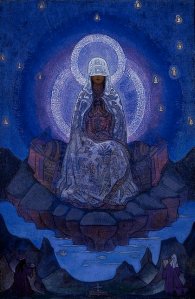 Meeting the Divine Mother
Many years ago, my inner wisdom asked the universe for a teacher. One who embodied all of herself and more. Who could walk me through the process of recovering my whole self.

I prayed for a keeper of secrets, a keeper of divine wisdom. I knew there was more to be explored about the earthly and spiritual realms than I was consciously aware of. I met several teachers who embodied courage, wisdom, and vision, yet something was missing in my work with them. I needed to go deeper to integrate my mind, body, and soul into one. In all my searching, one day I found her.

She was teaching an advanced class, Psychological Perspectives, part of second semester massage school. As soon as Dr. Nixon began talking about Alexander Lowen, chakras, bodywork and the psychological influence touch has on the psyche, I knew she was the teacher I had been praying for. Many others appeared as well, yet at this stage she held the essence of what my body, mind and soul were craving. Dr. Nixon was known for working with trauma. Not just on a mental level, but from an integrated one, including bodywork and energy-work. I made an appointment.

In our first meeting, after listening to me discuss my early life and my current longings and struggles, she suggested I may be looking for the Divine Mother.

I didn’t understand. I had no awareness or comprehension of what the Divine Mother was, nor the Goddess or Sacred Feminine. She was in fact, elusive to me. The only feminine I knew of associated with the Divine was the prostitute from the Bible. Mother Mary didn’t even occur to me…that’s how disconnected I was from my own feminine heritage.

Unfortunately many women and young girls have the same unknowing as I had.

Shrouded Feminine
For many years I lived under the shroud of the dark feminine as she lurked in my sub-conscious, my body, and around the corners of my childhood home, where I learned shame and secrecy as the definition of womanhood. Throughout my early life, I carried a stigma that burned at my very core, eroding away at the truth of who I was (or so I thought).

My sisters and I were searching for something solid, something to hold us as we emerged into adolescence. The mothering we received was deficient and depressive with a flair for the wild, leaving us untethered, directed to create from the unconscious.

Our mother’s lack of regard for sacredness in the acts of union led to confusion and misalignment within me, as she rode the dragon of her unbridled sensuality and sexuality. She was seeking to fulfill all her unmet needs.

Regardless of the effects my early life created (a deep sense of abandonment, powerlessness, and victimization), I was destined to survive and learn how to integrate and balance the heights of spirituality with the mysteries of sexuality. I’m sure this had to do with the strong divine feminine signatures of my soul (Virgo, Capricorn, Scorpio astrological signatures).  Along with the love I received from extended family members, and my parents when they were available.

Individually the themes of spirituality and sexuality are vast in and of themselves. Combined, they are powerful beyond measure, leading to embodied empowered living, and awakened kundalini and fifth dimensional creative aliveness.

When unexplored and deemed sacrilegious by culture, and most of the world, a woman (or man) can be projected upon as temptress…….

To consciously describe my mother’s energy, would be to say she had a great deal of Shakti with no idea how to harness it.

Shakti is the feminine principle in Hinduism that represents the coiled Kundalini serpent energy that resides at the base of the spine. Eastern Indian Hindus and middle-eastern cultures understand the feminine principle–although the women in those cultures are not valued (as of yet)–the Goddess teachings are alive there.

Here in the West, Christianity venerates the Virgin Mary and downcasts the possibility that Mary Magdalene may have been the wife of Jesus Christ. Virgin Mary represents an intangible chaste/silent woman, un-embodied and un-bloody (menses), separated from the terrestrial. As a child, I was confused by the two faces of Mary. For many reasons unknown to me at the time, I was drawn to Mary the prostitute. I shuddered at the story of her stoning.

Western culture offers no role models for women/girls. When a girl reaches puberty who is she to model after, especially if

What does a girl do with her developing body, her natural wildness in a world without role models? She hides and represses her sacred power, her aliveness.

In college American History class we were required to individually study and write an essay about an American historical event. I choose to study the Salem Witch trials. During my study I was drawn to visit the town of Ellicott City in Maryland. I discovered my cousin owned a jewelry shop there, and that my family had roots there as well. One day while visiting, I experienced a deep kinship with the town. The town is very old with a mysterious and eerie feel to it. Something primeval stirred within me as I walked the narrow streets…. My soul was connecting with something. For a moment I saw myself in another life. I was a healer, an herbalist, a medicine woman. While browsing in my cousins shop, I saw the five-pointed star, the pentagram, and it deeply resonated with me. I did not know why, except that my soul knew its language.

Years before I had seen the movie Rosemary’s Baby. A disturbing movie about a young woman, Rosemary, who supposedly was destined to give birth to the devil’s child. The pentagram was shown throughout the movie.

I bought a Pentagram that day. It was the mid-1980’s. I was nineteen at the time (nodal return). Covered, hidden, and underground, I was submerged in an abyss, a deep suicidal abyss. Little did I know then that my inner self was awake and sending me on trail to connect with my ancient lineage (which I would not truly discover for many years to come). All these years later, unraveling the cloak of confusion, of, what I witnessed in movies, experienced or didn’t experience in religion, early sexual abuse, and absent and aberrant parenting, to discover Mary, the woman, and Mary the Mother, has led me to understand the stigma I had carried throughout my life.

The ancient emblem I wore then is not only associated with my soul’s ancestry, it is directly related to the planet Venus, to the astrological sign of Virgo, to the Virgin Mary and to Mary Magdalene, our guiding light now at the turning of the ages. The pentagram, misconstrued and contrived for hundreds of years was unveiled on Hollywood’s big screen in the movie The Da Vinci Code in 2007, revealing the ancient symbol as a talisman for the ancient feminine.

The ancient symbol of the five-pointed star is so old it is impossible to know just how far back in time it actually extends…5,000 years…with modern associations to witchcraft…it should be understood however, that this is a very modern connection and owes nothing at all to the pentacle as it has appeared throughout history

The first written evidence for the pentacle dates back to the time of Sumerians, around 3000 BC. To the Sumerians the pentacle was associated with astronomy and with the Goddess Innana. Each of its points [of the pentacle] were delegated to a particular planet. Mercury, Mars, Jupiter and Saturn, with the top most point relating reserved for Venus. Referred to by the Sumerians, as the “Queen of Heaven.” To the Egyptians the pentalce had a specific meaning, when placed within a circle it represented a “duat” or afterlife. It was also representative of the “womb” of the earth, from which everyday life and the afterlife orignated.

The ancient Greeks, who made little distinction between the world of the practical and that of the supernatural related the pentagram with the mathematical equation of Phi, completeness and perfection, “Hugieia” or health.

The Golden Ratio, 1.618034, or Phi is a mathematical proportion that appears throughout the natural world. In humans bodies, plants, nautilus shells, and spiraling galaxies far from earth.

Until the last century or so was definitely not a symbol of evil. The the witch trials of the seventeenth and eighteenth centuries in both England and America the pentacle is never mentioned once and indeed is has, in its time, been as important to Christianity as it has to many of the world’s religions.